Tourism: the Prospects of the Sector

The Tour Operator Association of Russia (TOAR) predicts that in 2019, the flow of foreign tourists to Russia will increase by 20% and exceed 30 million people. There is every pre-requisite for this forecast to become a reality: the low exchange rate of the Russian ruble, the image of a safe and welcoming country that was created after the successful hosting of the World Cup, the continuously improving infrastructure, and the development of new tourism areas. 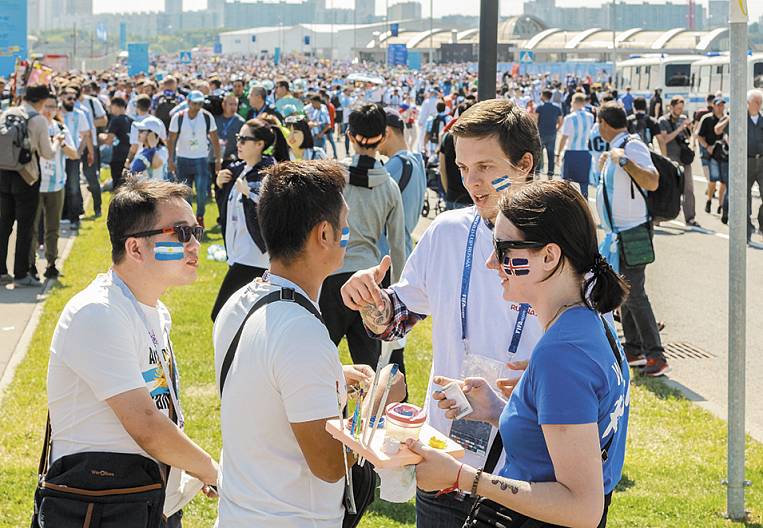 Doubling the export of services
The volume of tourist services in Q1 2018, according to the data of the Central Bank of Russia, increased by 33% when compared to the same period of the previous year. Preliminary estimates of the Central Bank indicate that the growth continued in Q2 of the current year as well.
The federal project, Export of Services, developed by the Ministry of Economic Development of Russia, foresees that the contribution inbound tourism makes to the country's GDP is to grow to USD 15.5 bn.
Currently, it stands at just half that amount: as of the year-end of 2017, it came to USD 8.9 bn.
International research also confirms that the general role of the tourism and travel sector in Russia's economy will steadily grow. For example, according to the data of the World Travel and Tourism Council (WTTC), in 2017 3.3 bn people were employed in this sector (4.5% of the total number of employed people in Russia). The organisation's experts anticipate that, by 2028, 3.8 bn jobs will be connected with tourism.
The tourism and travel sector in Russia grew by 3.2% in 2017, according to calculations of WTTC analysts. This figure exceeds the general trends of the Russian economy: other sectors in 2017 demonstrated an average growth of 2.2%.
The total spending by foreign tourists on trips to Russia in 2018 will increase by 7%, and in Moscow will grow by 9.6% per year over the next decade, the WTTC predicts.
According to the Analytical Centre of the Government of the Russian Federation, the average budget a foreigner has for a trip to Russia is RUB 144,000. Accommodation costs amount to about 23% of the total costs of the trip, international travel costs come to 24%, meals — 19%, and internal passenger travel — 9%.


How was the tourism sector influenced by the World Cup 2018?
The Russian Agency for Tourism believes that the inbound tourist flow to Russia could increase by 15% at the year-end of 2018 thanks to the World Cup being held in the country. The governmental agency refers to the estimates by the McKinsey Company that posit that the number of visitors from abroad will increase by 14–18% this year thanks to the world football championship being hosted in Russia.
However, according to TOAR, in 2019 the growth in tourist inflow will not be as significant — 5–10% compared to 2018, reaching 25.5–26.8 m people.
According to the Russian Agency of Tourism, the total number of foreign visitors to the World Cup in Russia came to 3.4 m people. The fans who visited the Russian Federation during the World Cup spent about RUB 100 bn.
However, many experts believe that the World Cup did not benefit the total year's tourist inflow statistics Russia, paradoxical thought it may seem.
Some "regular" tourists who arrive to see the sights and discover more about Russia preferred to postpone their summer trip in order not to avoid the inevitable rush surrounding the celebrations. It is no secret that, in any country during such large-scale events, the prices of hotels and restaurants go up, it becomes difficult to find a hotel room, book a restaurant table, or take a carefree walk in the central streets and admire the architecture.
However, the impressions made during the World Cup 2018 could become a stable and long-playing factor in the increase of the number of tourist trips to Russia. Ms. Maya Lomidze, Executive Director of TOAR is confident the championship and its visitors will serve to advertise Russia and foster additional demand. Experts of the Analytical Centre of the Government of Russia agree with this forecast. The fact that sports fan are visiting Russia for the championship might prompt football fans to return to Russia again in a conventional tourist setting along with family members and friends.
And they may return as early as this year. According to the Ministry of Digital Development, Communications and Mass Media of Russia, foreign citizens ordered 843,000 fan passports to visit the World Cup 2018. Experts remarked that the Fan ID made it easier for tourists to visit Russia; there were also free transport routes both in the cities and between them. Therefore, visiting fans took back good memories of the convenience of their trip to Russia. After the championship ended, the repeated visa-free entry for foreigners to Russia using their fan passports was extended until the end of 2018.


Multi-pass instead of the visa barrier
The visa remains the main obstacle foreigners face when visiting Russia. The majority of experts and market players agree with this statement.
The Ministry of Economic Development is already developing the mechanisms to relax visa restriction as one of the measures for increasing the export of services related to tourism and travel. The Fan ID experiment was considered successful and now the use of an equivalent document is being considered for foreigners who travel along the main tourist routes of the country.
There are plans to develop package tourism that will include recommendations of sights to visit, certified hotels, restaurants, and a transportation card or CityPass. A foreigner that purchases such a tour would enjoy simplified entry. Target countries, whose citizens will be able to make use of the simplified entry using a tourist equivalent of the Fan ID, must be determined based on the tourists' purchasing power and security concerns.
A Museum Multi-Pass could be another example of an equivalent document that, according to plans, would allow foreigners to not only visit museums and other cultural facilities at discount prices but also enter Russia without a visa.
There are plans that the Museum Multi-Pass should also include public transportation within the city. The Ministry of Digital Development, Communications and Mass Media, which oversaw the Fan ID project, gave its recommendations to the developers of the museum pass project, while the head of the Ministry of Culture, Mr. Vladimir Medinsky, supported the idea.


The Russian Far East: electronic visas and the tourist boom
The wide-spread use of electronic visas is already in place and part of the simplified visa regime. Since August 2017, electronic visas have been issued in Primorye Territory to citizens of 18 countries. The results of the electronic visa project in the Far East have proved satisfactory; now, a similar practice is proposed to be applied to Kaliningrad Region.
The demand for electronic visas to enter the Russian Far East among foreign citizens grew fivefold in the seven months of 2018 when compared to 2017, according to the August statement of the Ministry for Development of the Far East.
All in all, the traffic of foreign tourists to the Far East from January to August 2018 grew by 16% when compared to the same period a year earlier. These figures are given by the Russian Agency for Tourism (Rosturizm). During that period, regions of the Russian Far East received about 1.4 m of foreign tourists in total.
Rosturizm explains this is the result of the active work of the tourism business to generate and introduce the first package tours of the Far East to the market. Also, the tourism infrastructure in the Far Eastern Federal District has been undergoing intense development lately.
For example, the number of hotel rooms in Kamchatka will grow by one third in three years. As a part of special tax regimes, investors are putting their funds into the creation of two tourist clusters in the centre of Petropavlovsk-Kamchatsky. By 2020, a nine-floor, five-star hotel will be built. It will be the most modern one in Kamchatka with an in-house business centre and concert hall, helicopter pad and restaurants. Another range of investment projects proposes the creation of an ethnic cultural complex and visitor centre in the Kultuchnoye Lake Cluster.


Where do people come from and go?
The most frequently visitors to Russian are currently tourists from China, Germany and Finland; while the tourist traffic from India and Iran is also increasing, remarks Maya Lomidze. In 2019, TOAR expects the tourist traffic from Asia and Europe to grow since there are comparatively inexpensive flights from there. There is demand for tours to Russia in Italy and France as well.
For example, according to the Department of Sports and Tourism of Moscow, 203 thousand French citizens have visited the Russian capital since the beginning of 2018. This was a record number for the city. France is among the top five countries with the largest tourist traffic to Moscow.
Chinese tourists, who lead in terms of movement and volume of inbound tourist traffic, will stay in the number one spot in 2019. "This is a very promising trend; it is important to expand our coverage, diversify our product so that tourists see more than just Moscow, St. Petersburg; they should visit Kazan and Sochi as well. I believe that tourist traffic from China in 2019 will grow by 10–15% at least", expects Yuri Barzykin, Vice-President of the Russian Union of Travel Industry (RUTI).
Advisor to the head of the Russian Agency for Tourism, Mr. Dmitry Gorin, states that Russia is now in the top 4 most popular destinations for Chinese tourists alongside Japan, South Korea and USA. The interest of tourists from Asia-Pacific countries can be seen by the opening of a new charter flight connecting Kamchatka with South Korea next year.
"Russia is attractive to foreigners for its capitals and the Golden Ring but also for its Silver Necklace, Red Route, and Trans-Siberian Line as well. The Far East and Kazan also saw an increase in the share of tourists. There is currently a marked interest in Sochi the year round. Kaliningrad has excellent potential. Visits to Lake Baikal are in great demand but it still lacks the infrastructure. Extreme and gastronomic tourism are also under development — the concept of Russian cuisine is becoming more and more popular worldwide", insists Mr. Dmitry Gorin.
According to the Tourism Statistics Agency, the principal Russian regions visited by foreign tourists in 2017 were Moscow (4.8 m foreign tourists in 2017), St. Petersburg (3.75 m), Krasnodar Territory (900,000), Primorye Territory (640,000) and the Republic of Crimea (over 500,000).
In the past few years, new routes for foreign tourists have been developed as well. For example, the Silver Necklace of Russia project has been under development since 2015; it links historical cities, regional centres, and large residential communities in the Russian North-West where there are unique masterpieces and natural sights including UNESCO World Heritage sites.
All in all, 45 tourist recreation clusters were created in 35 constitutive entities of Russia in 2011–2018 as part of the federal target-oriented programme for the development of domestic and inbound tourism.
Теги: Kamchatka tourism 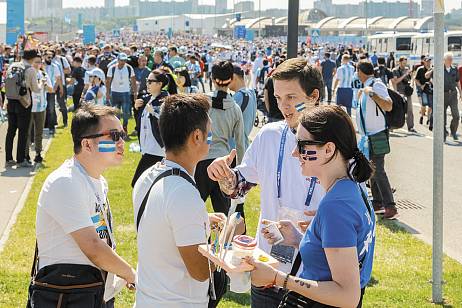 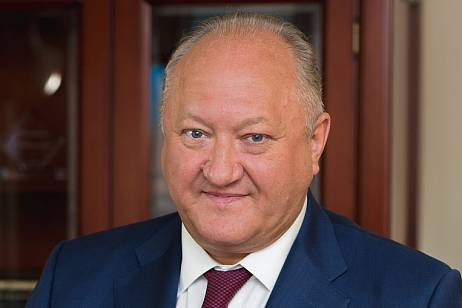